I am having a problem with backups on Amazon S3 on Linux only.
When testing the connection to my bucket it gets this message attached

Testing permissions and not leaving it.

I tested both versions 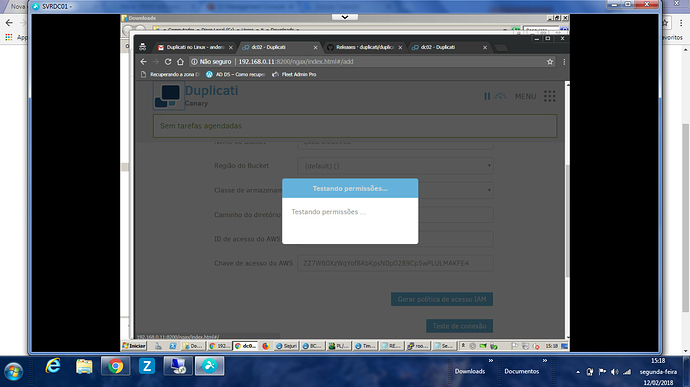 What Linux are you using, or more specifically what Mono version and do you know if you have current SSL certificates?

One thing you might want to try is to finish the job setup, export it as Command line, then try running that command line with the --verbose=true parameter added.

This command line run should let you see messages the GUI may not be showing.

Oh, and I know you said Linux but it sure looks like you’re running something (Linux?) while remoting into Windows 7 that is being remoted to from Windows Vista… Is it possible there might be some VPN or other routing issue going on with all the remote access?

This server is an Ubuntu 16.04 running Zentyal with Samba Active Directory.
I have a backup on this same server being done via SFTP without any problem.

Thanks for the details - that helps a lot!

It sounds like you may be running into the issue reported here, do you agree?

(By the way, edited your first (and most recent) post by adding “~~~” before and after the errors / command line results to make them easier to read.)

Hello
Yes, it is the same problem, I updated the latest version today is the problem continues.
I tested on Amazon S3 and B2 both have the same problem.
What is working is WABI
Thank you
Anderson