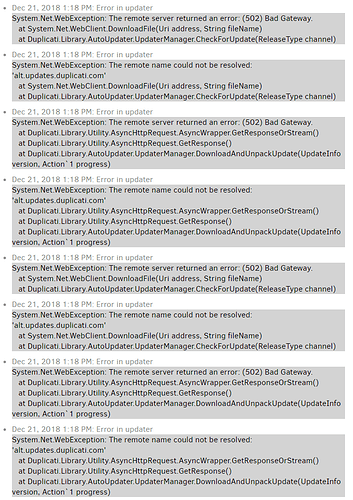 Is this a known problem, and can anyone suggest a workaround to allow me to update my systems?

Same here on beta channel, tried to update yesterday and also got

Is this a known problem

The alt.updates.duplicati.com resolution error part is known because the name is not set up, however elsewhere in that article there seem to be some mysterious failures in updates quite recently. It’s conceivable that the system is under repair, or partially disabled to cut updates off at this point instead of a later failure…

Duplicati.AutoUpdater.exe check is a way to keep an eye on things, as shown in this debug sequence.

Checked again today and everything seems to be back in working order. Updates are working as expected through the GUI. Thanks, Duplicati Gods, for fixing this!

I’m not sure if anything was changed, but the alt domain not working is odd. A fallback that doesn’t work isn’t good for much

Odd - I’m still getting “NameResolutionFailure” and “Unable to verify signature” error Experimental based Docker container with both 2.0.4.8 & 2.0.4.9 (manually updated w/unzip into updates folder).

Perhaps equivalent to my CLI results. My GUI install is a bit odd (running a 2.0.4.5 beta debug Server out of the updates folder as a workaround for the Program Files base rejecting my debug version), but FWIW I get

Looks like this had been resolved - is it working now for people besides me?

Arh! That got me on track! It is a problem with the mirror. It detects a new version and downloads that, but overwrites the old file without truncating it first. Normally that is not a problem because the manifest file grows in size. But I recently removed a bunch of old release notes, so the new file is smaller, causing the downloaded file to contain junk at the end. I have fixed the mirror server and now it serves the correct file.