I’m trying to get my first backup with Duplicati going, but I’m already confused by something seemingly basic.

I’m on Mac, and when asked to select “Source Data” a bunch of things are presented, that don’t entirely make sense. Specifically:

There’s also a “Computer” selection available, that of course includes everything on the entire computer. Pretty confusing for someone new to the Duplicati. What should I select if I just want to backup all my user files?

I don’t have one, so am hoping some user with a Mac can comment on this topic.

My assumption is that it’s giving you a lot of options so you can get what you like.

Frequently Asked Questions about Mac Home Folder seems to show that (as you suggest) Home includes the others but it also appears to include quite a few more which some might wish to omit.

So what happens if I just select Home and none of the other 4?

I would assume from the article that you get the rest because they’re shown as subfolders of Home.

What happens if I select them all?

I would assume you get Home and that will include the other subfolders. Deduplication should ensure
data isn’t backed up multiple times even if it somehow it occurs again (file copy, hard link, and so on).

Ultimately, though, macOS Home is, as far as I know, represented at a low level with a filesystem path.
Duplicati is the same. If you want to see exactly what you got, save the job and look at Commandline.

If you do shell commands, I think such systems often represent Home as tilde (~), e.g. you can cd ~

I don’t think you’ll invoke deduplication by selecting them all though. It “should” just go through once, although I’m wondering if redundantly specifying paths is leading to the warnings sometimes seen…

What happens if I select everything except for Home?

I would assume you get what you select and not the rest.

What should I select if I just want to backup all my user files?

I don’t know Mac layout well, but “all my user files” sounds like Home if you can stand all the folders.
Duplicati below the UI is filesystem path oriented. If you know your folders, save the job and check
Commandline for the job. The Commandline arguments will show the actual paths for that backup. 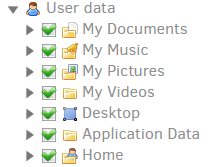 There’s also a “Computer” selection available, that of course includes everything on the entire computer.

Have you tried expanding it? It should let you go down to pick exactly the folders and files you want.

One thing about Duplicati is it has many options. This is path-based. The first you show is symbolic.
I prefer paths myself because what I want isn’t available through the fixed set of symbolic selections without getting more than I want. Some backup programs go super-simple and take the whole drive.

Duplicati is flexible but takes some setup. That’s unavoidable in any bring-your-own-storage design.
By offering multiple ways of source selection, maybe people will see one they like – or get confused.

I am on Mac(book). Indeed Apple offers you more then one way to Rome. To be sure from which user a backup will be made, I have chosen for the path [Computer]-[Users]-[name of user]. So I am 100% sure the right user will be backed up. 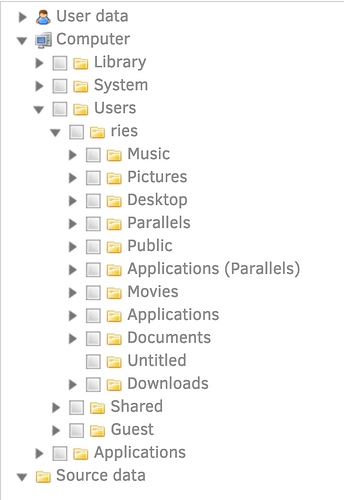 I run Duplicati as a user which is sometimes me, and sometimes one with more privileges.
That’s why I specify explicitly in the Computer tree, not User data, which some may prefer.
It sounds from the last post like things are cleared up, and the topic needs no further work.