Hello, if someone could clarify something I have a 53Mbps connection on my file server install Duplicati and synchronize 3TB with an S3 Bucket but the hard synchronization 1 week and Duplicati only consumed 7MB maximum of the connection this is due to some limitation of Duplicati.

Duplicati only consumed 7MB maximum of the connection this is due to some limitation of Duplicati.

More likely it’s a limitation of either your Duplicati settings or your hardware and how Duplicati is using it.

I checked my network consumption graphs and did not get to the maximum, check graphs of the cpu and ram of the team did not reach the maximum either.

In Duplicati configure this: 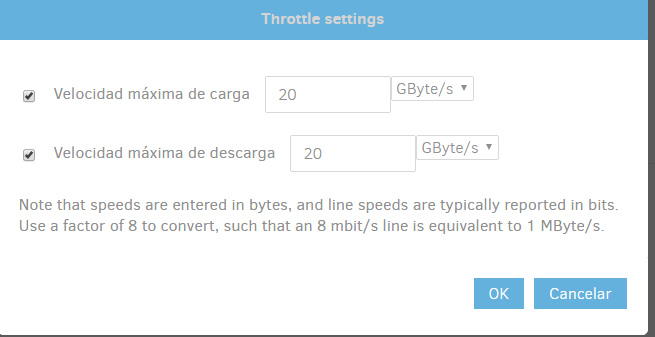 Note that those throttles are to restrict bandwidth (in case you want the network for other things such as video streaming) not targets.

Usually, we see hardware limits showing up as high CPU or disk usage.

While there are likely places where Duplicati could be optimized to need less CPU or disk (probably meaning more network bandwidth would be used) there are no DEFAULT limiters in place.

There are some parameters to allow “nice” disk usage or limit CPU usage (such as idle only) but they are not enabled by default.