New version is not detected

Same issue here on official Docker container - even after I remembered to change my Update Channel from beta to canary.

But I’m assuming it’s a caching issue - gonna restart the container & see what happens… No change. I’ll try again in a few hours.

Instead, this is displayed and doesn’t change afterwards:

I assume it’s still there even in a fresh incognito / private window?

Can you check the server log and see if you’re seeing the same signature error that I get?

It looks like I also get some of these:

The screenshot is what I see in Microsoft Edge. I upgraded from 2.0.4.4 to 2.0.4.6 by overwriting with the contents of the Zip file on 2 systems. Both installs have the same problem in Edge, see screenshot above.

In IE, Duplicati Web UI doesn’t load at all, it only shows this popup on both upgraded systems:

I’m not at a machine I can do that sort of test with, but it almost looks like the server starts enough to provide the basic UI but then stops responding when specific requests are made.

No, whatever I do (start normal/inprivate, F5/Ctrl+F5, restart computer), the symptoms stay exactly the same: malformed log page in Edge, “Not loaded” popup in IE.

New version is not detected. Clicking Check for updates now in the About page doesn’t show a popup that a new version is found.

Are you also getting NameResolutionFailure followed by Unable to verify signature errors in the global log?

I haven’t done any sort of manual update - would I be expecting to see any log errors?
I don’t necessarily have time to futz around (at the moment) with forcing a manual update, so I figured I’d wait and be a canary to try out whatever fix they come up with to address the update check issue. If you want me to try anything in particular though (as long as it’s relatively quick) then i’d be happy to.

Updated one Windows server, looking good so far and the new log UI does improve things, thanks.

After copying the contents from the Zip version over the current install, the Log files are not shown. Instead, this is displayed and doesn’t change afterwards:

Can you open the Dev Console and see which errors are displayed there?

In IE, Duplicati Web UI doesn’t load at all, it only shows this popup on both upgraded systems

I’m afraid I may have used some features that are not available in IE. Can you also open the Dev Console and send me the errors?

Can you open the Dev Console and see which errors are displayed there?

In IE, I can’t see any errors. When accessing the web page, the login window shows up instantly. Alter entering the password, for about half a second, the page name in the IE tab is Backup and changes back to localhost. After 2-4 seconds I get the The page is not loaded message. Clicking the Reload page button of refreshing the page (F5/Ctrl+F5) doesn’t help. 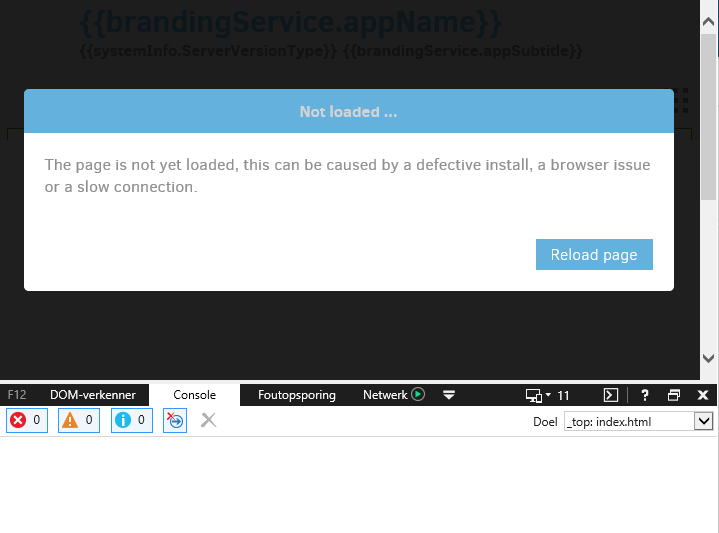 Not entirely sure why this would happen suddenly.

The build failed half-way through so I restarted the build. It could have uploaded some broken files, but the signature should be valid.

Assuming the network is otherwise working fine, it seems to indicate that the updater URL is broken. I hope this is not a broken beta build …

Could you try running Duplicati.Library.AutoUpdater.exe and see what URLs it reports using?

That does indicate some problems with IE not supporting the JS features. Unfortunately we only have automated testing with FF (which is currently failed for other reasons).

It seems Edge does not support catch blocks without parentheses (?)

That does indicate some problems with IE not supporting the JS features. Unfortunately we only have automated testing with FF (which is currently failed for other reasons).

I remember checking Edge support for some of the things I wrote, not all though. I’d guess that fixing the catch block would be the only thing needed.

I haven’t done any sort of manual update - would I be expecting to see any log errors?

Yes - I suspect an automatic check-for-updates happens when you connect to the UI (or in my case log in) and that would likely show the same errors.

Could you try running Duplicati.Library.AutoUpdater.exe and see what URLs it reports using?

Is this what you need?

that would likely show the same errors

I guess I should’ve taken your word for it originally.

That is fine, I have not set up the alt.updates.duplicati.com DNS, so at least that part is not a problem.

Is this what you need?

Yes, it shows the correct url’s so at least that is good.

I’ve fixed the problem with Edge (along with other stuff in backup-log-view, a PR will come soon).

Just tested it, everything looks good in both IE and edge!

For the record, my updates are working now.

Arh! That got me on track! It is a problem with the mirror. It detects a new version and downloads that, but overwrites the old file without truncating it first. Normally that is not a problem because the manifest file grows in size. But I recently removed a bunch of old release notes, so the new file is smaller, causing the downloaded file to contain junk at the end. I have fixed the mirror server and now it serves the correct file.