OnedriveV2 not available as provider choice

Microsoft Graph API is referenced here but that option is not available to me?
https://duplicati.readthedocs.io/en/latest/05-storage-providers/#microsoft-onedrive-v2-microsoft-graph-api

Hi @arktex54, welcome to the forum!

Thanks for providing that link to the docs say OneDrive v2 should be available as a “Storage type”. When I look at my 2.0.3.8 and 2.0.3.9 installations I see it listed as below. 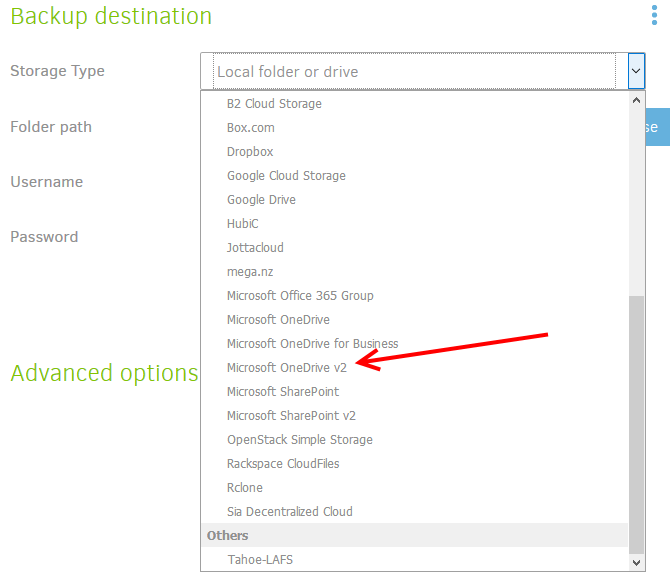 Thanks much for your reply.

Duplicati.com - “Download the latest and greatest version of Duplicati here:” 2.0.3.3

May I ask where you got these higher versions from?

There are a few ways of doing it, which one you use depends on how you want to user your system.

In the GUI:
If you go to the main menu Settings page you’ll find a section called “Update channel”.

Right now you’re probably on the “beta” channel which is the most stable. If you change that to the “experimental” (next most stable) or “canary” (least stable) channel then you’ll see other (and more frequent) updates.

“Over” install
If you’d prefer a fresh “base version” install rather than an in-GUI update, you can download the appropriate installer from Releases · duplicati/duplicati · GitHub.

Manual:
You can use some of the steps in Downgrading / reverting to a lower version to manually download a newer version (say 2.0.3.5) and unzip it into your updates folder.

Restart Duplicati and it should find that version and run it.

If you do decide to shift to canary versions to get access to OneDrive v2, I’d suggest not going past version 2.0.3.5 as the later versions introduced a lot of code changes that haven’t been fully ironed out yet…

Hi, I have the same problem.
If I use any docker image, there is no such option as OneDrive v2.

I could downgrade, but because on November 1th the support for OneDrive v1 will be gone, its not a solution.
Is there something missing in the Docker-Images?

I think this arrived in Release: 2.0.3.4 (canary) 2018-04-02. Pull request: Add new backends for OneDrive + OneDrive for Business, SharePoint, and Microsoft Groups based on the Microsoft Graph API #3118

I’m concerned about timing, due to Microsoft’s deadline, and this feature only being in canary release so far. Possibly migration aids and/or publicity is advisable in order to reduce broken backups come November 1st. Doing another Beta has been a desire, but I’m not sure when it will happen or if an Experimental would help.

Now back to the actual latest question

, I don’t run Docker but I’m wondering if psywolf85 runs CLI or web.

is one way to see if at least that code knows onedrivev2. Also check web About --> System info version info, consider possibility of browser needing a page refresh, cache clear, restart, or whatever (maybe view is old).

Hi, I am facing the same issue as psywolf85 with the official Docker images.

This issue has been reported to Github previously.

Official docker image is not including all backends #3198 is my update with a lot of technical detail, but mostly being able to characterize the problem would be a good start. @psywolf85 almost sounds like it’s not only a OneDrive v2 problem, but a OneDrive of all sorts problem, which would be what I (rather disappointingly) saw:

were all missing. How does this compare to your lists? Are you missing more? Less (got Microsoft OneDrive)? Feedback from @anon77588929 and others with storage types missing in official Docker would aid understanding. Don’t look for it in 2.0.3.3, and ideally see how the new Release: 2.0.4.1 (experimental) 2018-11-08 does on a test system (because I’m not certain what database formats changed when, and downgrading can be difficult).

Note that 2.0.4.1 experimental in both the official AND linuxserver Docker containers appears to have the complete list (so DO include the above 4 Microsoft items).

in both the official AND Docker containers

??? Does that mean these are two different containers? I consider the one listed at top as “official Duplicati”. Regardless, you’re seeing this oddity at least sometimes, and the unpredictability of results does bother me.

So far I’ve seen this oddity only BETWEEN VERSIONS but not “sometimes yes sometimes no” within the same version. (EDIT: SEE BELOW)

My guess is there was a mistake with the automated build script for the Docker containers that has been resolved as of 2.0.4.1 experimental.

Does that mean these are two different containers

That being said - during my 2.0.4.1 -> 2.0.3.14 downgrade test I found that after re-upgrading to to 2.0.4.1 I’m back to missing the 4 items listed previously (even though I did see them before) so this DOES SUPPORT your finding of seeing this oddity “sometimes”.

I tried 3 restarts of the official container and they have not yet returned.

I tested 2 restarts of the linuxserver container and they all showed up correctly every time.

When missing, they are also missing from the “Direct restore from backup files…” list.

Note that on my Windows 10 box (which still hows the v2 options in the web GUI) they still do not show up for me in the BackendTool help:

I somehow missed this post completely. For the record, I upload images to https://hub.docker.com/r/duplicati/duplicati/, and I have no control over the linuxserver repo.

The onedrive and onedrivev2 backends are stored in the same dll Duplicati.Library.Backend.OneDrive.dll, so it is strange that one of the providers are missing.

I will investigate asap.

There seems to be some missing libraries in the Docker images:

I tracked down the problem. These two packages are missing from the Docker images:

Edit:
You can “fix” the images by running these two commands (assuming your container is named duplicati):

Then restart the container and all should work. I will update the docker scripts and build a new experimental.

I have now put up the 2.0.4.2 experimental build, which is the same as 2.0.4.1, except with extra dependencies installed in the Docker containers.

My testing used the kenkendk CommandLine “test” test, my BackendTool “help” test (27 keys), and a browser, which shows 29 entries in the dropdown, because keys for openstack and s3 are also in “Standard protocols”.

I’m also not able to get the Windows 10 problem @JonMikelV reported above, at least up through 2.0.3.14 canary, running native on Windows 10. There’s a Docker for Windows, but that output snipping looks native…

Ok, from the release post, I assumed you were running some Docker stuff.

But good question about the updates. The packages that I added were a part of the “host” operating system packages. The Duplicati updater does not touch the system in runs on.

I’ll try installing another container now but my guess is I’ll end up with the 2.0.3.3 beta…

Yup, most people will probably not even have the updates folder persisted, so a container restart would revert to the image version.