I’m using Duplicati BETA 2.0.6.1 on host A and Duplicati BETA 2.0.6.3_2021-06-17 on host B. I had planned to put (file server) host A out of service and move the disk “exactly as is” to host B and taking duplicati (and existing DB + backup sets) along. I expected my backup job execution on hostB to run through (with almost no Kilobytes changed) within the normally logged job duration of about 8 minutes. BUT: It took about 5 hours.

So I did the following:

Here is my log of the last backup execution on hostA (“before moving disk + duplicati to hostB”): 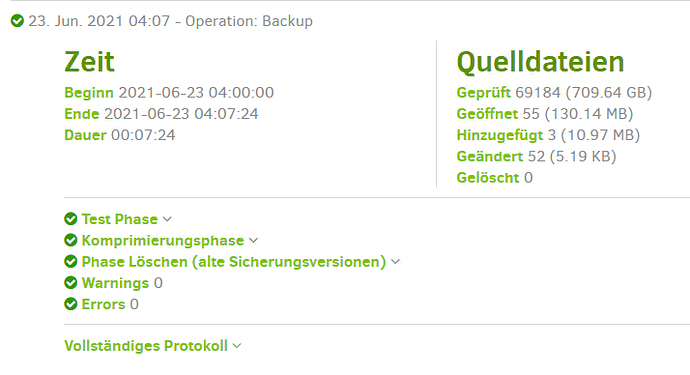 Here is my log of the first backup execution on hostB (notice the changed: 5.75 KB): 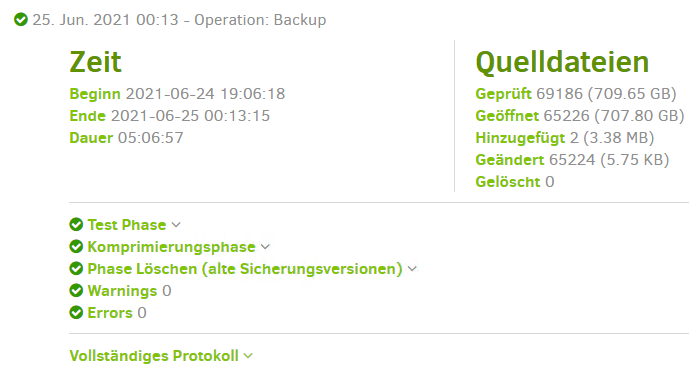 Here is a log of the next regularly scheduled backup job execution on hostB which took the expected backup duration again: 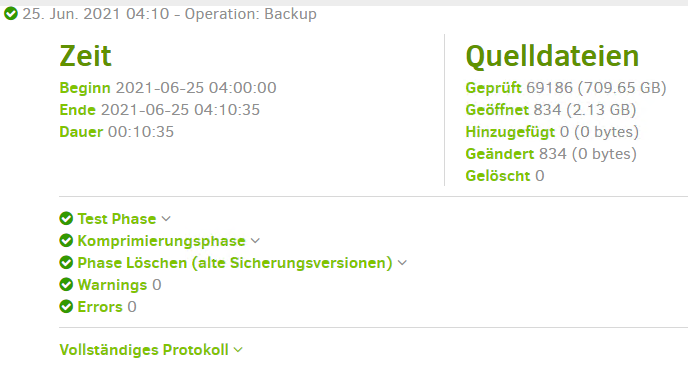 Summary: I observe a backup job taking very long, re-reading all data with (from admin perspective) no obvious reason and then making “fast differential” scan+backup again as normally expected.

Can this behaviour be fixed or is it intended to recheck everything on “host change”? I again checked twice and my mount point chown/chmod/getfacl of /datapool0 was not modified during “the move”. I also use Syncthing which itself keeps a database with file permissions and checksums and it didn’t report any single changed/re-read file after starting it back up with the existing database of hostA on hostB.

Thanks for your answer.

I’ve hit that “full re-read after no files have changed” problem again and think I can shed some light into the cause now. When I moved the ZFS disk from host A to host B, it occured the first time. I later noticed that I did NOT change any file data nor file permissions nor file ACL.

But: The move from my SAMBA domain member (host A) to the SAMBA AD DC (host B) led the system to output UID/GID numbers running “getfacl /zfs-storage/path/to/folder” on host B instead of the expected “DOMAIN\username” and “DOMAIN\groupname” output I previously had on host A.

I then re-mapped the IDs via my SAMBA AD DC LDAP using SAMBA NIS extensions to get the “same state and output” again on host B like it was on host A (before moving the disk).

Now: Backup incrementals ran fine, with very little data re-read and just the data got read which was really changed. One day later, I’ve decided to add another user via setfacl to my /storage/path/to/subfolder tree and Duplicati again started to re-read everything in there on backup execution.

I’ve googled and found the Duplicati advanced options page, where it is mentioned Duplicati does the “re-read of files” by default behaviour if ACL or other metadata changed.

My question now: Can I somehow force Duplicati to only re-read file contents if the file size or the modTime changed?

Does this completely turn off backing up metadata like ACL and modTime in Duplicati? Or is the metadata still written to the backup but not used for deciding if a file has to be re-read completely?

A quick note: I don’t want to loose ACL metadata when backing up with Duplicati. Is there maybe a better option/way to take to speed the backup process up after I just changed ACL on a whole subtree?

changed ACL on a whole subtree?

Does Linux have ACL inheritance like NTFS does (probably the typical case), or is it on every file, meaning setfacl --recursive I suppose? I don’t use Linux ACLs, but if it’s kept per-file, there’s also your request

which I think would be violated if you went the --skip-metadata route.

--check-filetime-only = false
This flag instructs Duplicati to not look at metadata or filesize when deciding to scan a file for changes. Use this option if you have a large number of files and notice that the scanning takes a long time with unmodified files.

can reduce the scanning time, but it will defeat an objective of noticing and backing up metadata change.

BTW the log at verbose level shows the reason(s) why a file was scanned. An example of such output is

and this is probably from the code below, where you can look at the rest of the decision logic if you like:

Thank you @ts678 , those are very helpful and easy to understand insights for a newbie like me :). Definitely helps me to use the product as is the right way.

If it “fits the project / code” , maybe a --decide-changed-by-filetime-only still storing metadata for restore could be introduced somewhere in the future. But even without it, Duplicati is great for me!