Yep, that works too. I think I saw another user talking about setting up a 2nd backup job with the sole purpose of backing up the 1st job’s database file.

If you’re storing in the cloud, that makes sense as the de-duplication will cut down on data transfer. The drawback is that if you end up needing to restore the 1st job you’ll first have to restore the 2nd job to get the DB to then use on the 1st job.

It’s not a big deal - having a small backup of just the database file(s) should restore very quickly, but it’s another step to keep in mind in case of disaster recovery.

You got the point.
I use duplicati for a 12 tb backup on google drive (4 jobs)
Adding a 5th job with only the db file make me secure with versioning…

How about the recreation speed? Why is taking so long?

How about the recreation speed? Why is taking so long?

I haven’t look specifically at the database recreate process but my guess is there’s just a lot of database processing going on. Remember, this process isn’t just restoring a file from a remote destination - it’s reading through every index file on the destination and adding the entire history of every file contents in 100k (by default) blocks of data.

With a 12TB data source chopped into 100k blocks that’s 128.8 million block records being recreated in the local database for the initial backup. Then add to that however many blocks changed with each new file or historical version of an existing file.

Once some of the more commonly used functionality has been updated and finalized (like the pending improvement in restore browsing speed) I’m hoping time can be found to review the database recreate process for performance (as well as reporting) improvements.

Understood…
Another question…if the recreation jobs stops at half I have to restart from the beginning?

if the recreation jobs stops at half I have to restart from the beginning?

Hmm…that I’m not sure about.

My guess is that one a recreate is started a database will have been created at which point a Repair should be enough to continue from any interruption point, but @kenkendk would know better.

Edit: Note that my guess is WRONG and it appears once a “The database was attempted repaired, but the repair did not complete.” message is received a Recreate action is necessary to recover.

so we wait a answer from @kenkendk!
thx

uppp @kenkendk can you give me a feedback?

Is this variable available in the current beta release 2.0.2.1? Is there a full list of variables documented somewhere?

@Bazzu85, have a little patience - kenkendk generally only has time to hit the forums once or twice a week.

@drwtsn32, I don’t know of any list but pretty much any parameter is exposed with a DUPLICATI__ prefix (yes, two ending underscores) and any “-” replaced with “_”.

"run-script-after" only if backup finished - how? Support

In a general sense, all the Duplicati options are exposed as environment variables prefixed with “DUPLICATI__” and, due to some some env. variables not allowing dahes, all dashes (-) replaced with underscores (_). So if you’re running a DOS batch file you could get to your --throttle-upload setting by using %DUPLICATI__throttle_upload%. There are also some special non-option vairables that are probably what you’re intersted in: DUPLICATI__EVENTNAME = when script was triggered such as “BEFOR…

I ended up putting a ‘set > filename’ in my post-backup script so I could see all the values. here they are in case others are curious. (Some values have been redacted.) This was from version 2.0.2.1.

However, I should note that the list generated from set won’t include ones with no value, so what you got is probably everything you have values for in the particular job on which you ran the set command.

So there are a lot of optional/advanced/less-commonly-used parameters not represented in the above list.

Good to know! There were a few listed that had no values set (throttle up/down for instance).

Trying to start a repair give error…

What can I do? 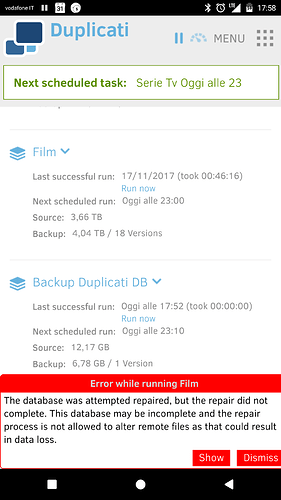 Apparently my guess above was wrong and you will indeed have to start over.

That is another problem. To fix this, go to the “Database …”, then choose the “Recreate” option.

Another question…if the recreation jobs stops at half I have to restart from the beginning?

Unfortunately yes… The recreate is not clever enough to figure out it could just continue.

kenkendk generally only has time to hit the forums once or twice a week.

Sad but true… and this time I got way behind

and doing a backup of all my db every day…

I do the same thing! A “DB’s backup” right after the backup runs…