I’m now trying to supply it through the environment variable PASSPHRASE, but it seems to be ignored, as I get this error:

I tried in both this way, but the result is the same:

Am I doing something wrong, or is there a problem?

I’m guessing this is a bash script? Do you have any special characters in your password that bash may be interpreting/processing? (Like a $ for example.) If so you might need to escape those characters.

Yes, this is a bash script. I don’t have special characters in the passphrase, I only have alphanumeric characters [A-Za-z0-9].

So you are doing something like this in the duplicati-cli part of your command?

I wonder if it really wants quotes around it. You might need to escape the quotes for bash to keep them, eg:

So you are doing something like this in the duplicati-cli part of your command?

No, I’m not using the --passphrase argument, I’m just setting the PASSPHRASE variable.

According to the docs:

Supply a passphrase that Duplicati will use to encrypt the backup volumes, making them unreadable without the passphrase. This variable can also be supplied through the environment variable PASSPHRASE .

This variable can also be supplied through the environment variable PASSPHRASE .

Interesting, I didn’t know about that option!

I tested it out and it works for me. I exported one of my web UI jobs as command line and removed the --passphrase=xxxx part. Then I did export PASSPHRASE="xxx" and ran the command and it worked as expected: 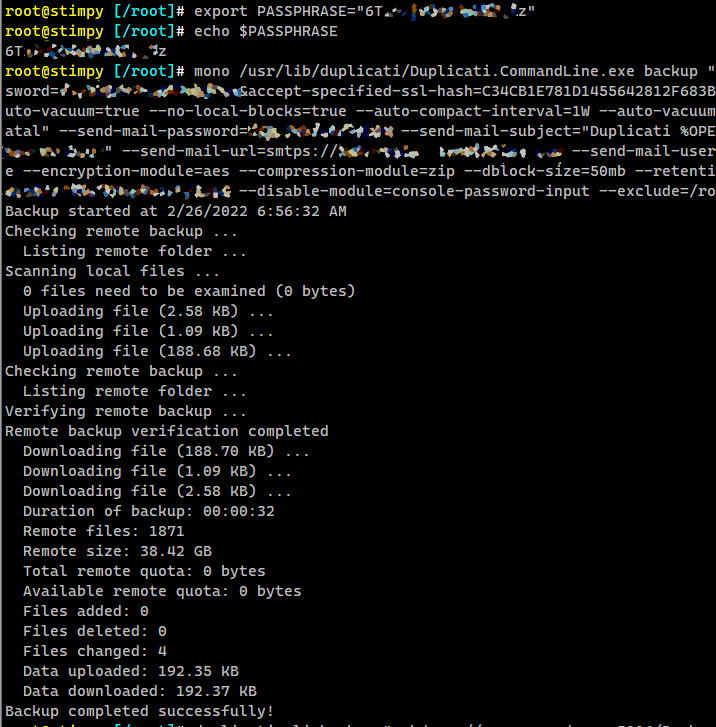 Replacing mono /usr/lib/duplicati/Duplicati.CommandLine.exe with duplicati-cli made no difference, both worked.

environment variable PASSPHRASE, but it seems to be ignored, as I get this error:

I’m confused. Was the error there without that? If not, the addition was not ignored.
Of course, you’d also like it to do what you want. Maybe it’s time to test decryption:

I made a backup using duplicati-cli

Was it an Export As Command-line from a GUI job, or completely hand-built (harder to do right)?

I figured out what my problem was; nothing wrong with duplicati, the problem is that I was running duplicates with sudo, and thus the environment variable was not being passed. I therefore had to use sudo -E duplicati-cli [...].