Hi to everyone. Here’s my issue: i configured two separate machines with Duplicati (one Win10 and one linux Ubuntu) and both send backup toward a Qnap NAS. Pc with Win10 works well but linux machine, even if it finish without warnings every backup job, if i check on the NAS the destination folder for my backups (same folder for both machines) i cannot see any file. If i check destination folder through NAS interface i see it empty. But if i make a restore i can retrieve any backup made. Strangely, i have the same problem with a different Win2016 server that backups files on a S3 bucket. Same story: i do not see any file but if i want to retrieve data from backup made, there is no problem. The question is: where are all the files? Thanks in advance.

I’m betting the files are somewhere else. You SHOULD be able to see the files, whether it be on a NAS or in an S3 bucket.

Can you show me a screen shot of your destination page on the Ubuntu machine?

By the way, this is very concerning:

(same folder for both machines)

You definitely do not want more than one backup job going to any particular folder. Each backup should have a unique destination. In my case I have a main backup destination folder, but then save each backup job in a different subfolder. Something like this:

This isn’t related to you not seeing the backup files, though.

Hi, thanks for reply. I must clarify that when i mention “same folder” i mean same folder on a storage unit (NAS in my case) that has a single user access (local user “duplicati”) for security reasons, and this folder has also two subfolders, one for each backup job. So, all jobs are currently using same local NAS user.

Basically i cannot find where are all Duplicati’s backup files (but maybe i’m doing wrong setups: i started recently to use this tool). To show you please see this short video: first i make a backup job that send data on my NAS, and the first problem encountered (see at 01:07) is when program ask me to create backup destination folder (in this scenario \192.168.1.2\backup_macchine\Duplicati\test_backup). Folder “test_backup” does not exist, and correctly Duplicati tell me that, but even if i choose to create it this does not happen, because if i check on NAS i found there is no this new folder (see 02:14). Going on, program check connection succesfully and go backupping files. After that i try to restore: first time i had a problem, but this is not the problem mentioned earlier, we can go ahead. Tryed second time to restore and this time process end correctly (at 4:40). But, again: where are those source backup files? I do not see anything in the path aiming at my NAS. I have this problem in following cases:

On the other hand, i can see backup files in this cases:

Your video is really low resolution, so it’s hard to make out. But it looks like you are trying to use a Windows-style UNC path for the destination, but with Duplicati running on a non-Windows machine. That won’t work! You’ll probably find your files were placed in the root directory of the local machine.

I did a quick test on a Linux machine to demonstrate. I set my backup destination to \\NAS\Temp\Blah and ran a backup. Instead of the files being placed in the UNC path, Duplicati created a folder in the root directory: 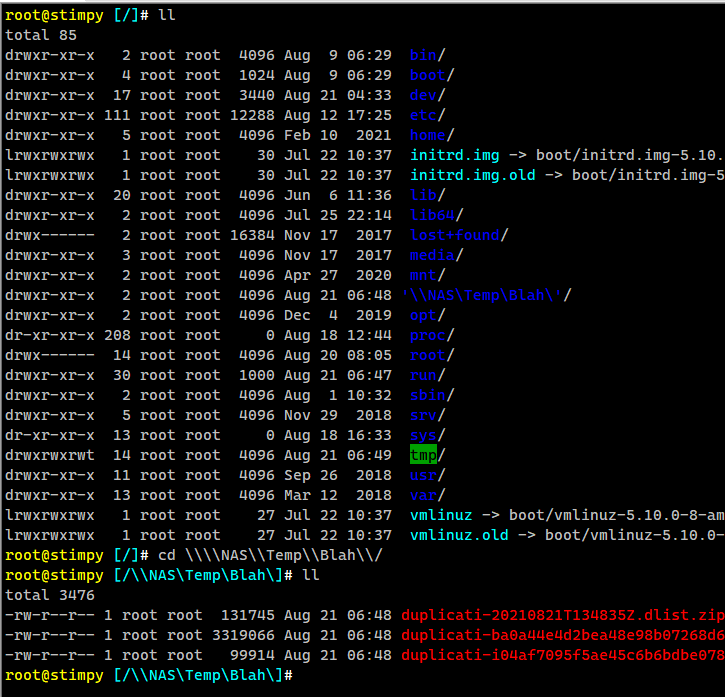 Can you check your system to see if this is what’s happening?

You’re right (and i’m so stupid

). In fact Duplicati copied files on root directory due to my error using backslash intead forward slashes. But even if i use unix type UNC path Duplicati continues to create a local folder under root directory (called “192.168.1.2”, this time).

By the way, i think it’s an illogical behaviour by Duplicati software, because i cannot understand why when i set a path to send backup to, and Duplicati ask me credentials, the check on user “Duplicati” go well (but this is a local user configured on my NAS and does not esist on linux machine that manage Duplicati’s backup jobs). 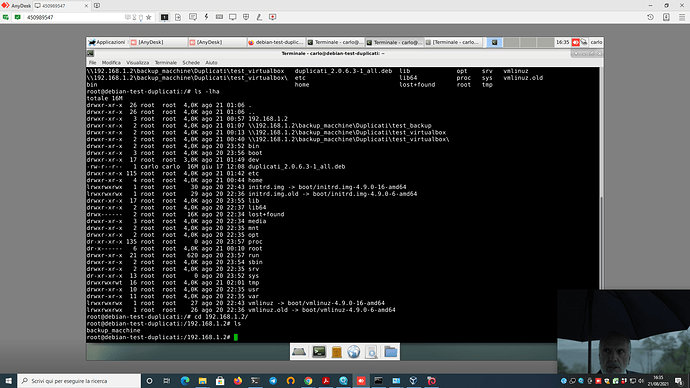 Maybe i must mount NAS destination folders on that linux machine prior to configure backup?

Yes, you can’t use any type of UNC pathing on non-Windows systems regardless of backslash or forward slash. You’ll either need to mount your NAS destination to a local mount point, or use a different protocol that your NAS supports, like SFTP, WebDAV, etc. I have used both SFTP and WebDAV with Synology NAS’s with good success. Not sure what kind of NAS you have.

All right. Thanks again for your aid.