Bug in REST response when calling from PowerShell 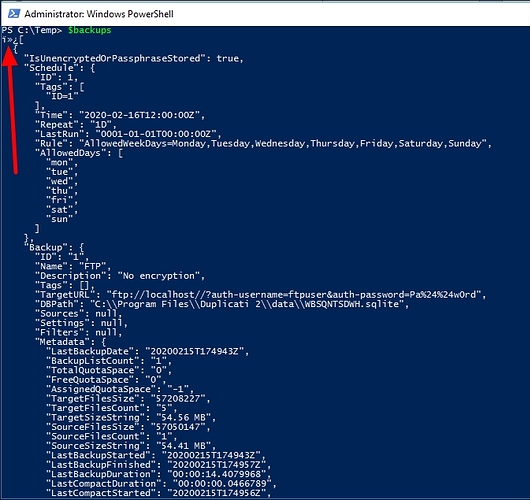 These three characters need to be removed so PowerShell can convert REST response to PowerShell object.

Can you show me what command you used to collect this info? It will help me troubleshoot/debug. I am very familiar with powershell but haven’t tried using it to query Duplicati REST API directly.

Past “published” are “supported” and “stable”. The main focus is on getting essential backup stable, meaning working reliably and easily enough to exit Beta. “Stable” for an API may mean low-change.

My thinking on the three characters (although I’m far from an expert) is it’s a UTF-8 byte order mark. Presumably there’s some way to remove such a common thing in PowerShell (may vary by version).

Web search finds big debate about whether using these is a good thing or a bad thing. I’ll stay out…

Here’s one I made with notepad.exe, saving as “UTF-8 with BOM” on the “Save as type” dropdown:

If you’re trying to do automation, you might also see talk at above feature request which mentioned:

I didn’t work a lot with REST, but never had a problem that I need to cut some characters when JSON object received.This is why I report it as bug.

In any case, I found easy way to convert it to PowerShell object: