Backup stuck at: One or more errors occurred. (Could not find file "/tmp/...)

Edit: I found the problem, a permission setting prevented any new files from being written at the destination. It had nothing to do with a temp directory or /tmp.

My backup has been stuck for 4 days at this error:

Previously I had 3 successful backups without incident. Nothing interesting was happening on the remote end that I’m aware.

I’ve seen some prior threads on the subject. Two of them had success setting asynchronous-concurrent-upload-limit to 1, but it didn’t work for me.

What may be interesting is that I didn’t have a /tmp. My backup was in a chroot jail. While on the server my path is: /backup/chrootjail/home/brad, from my logged in point of view, I see that path as /, and it didn’t have a /tmp. I’ve been running without a /tmp for 2 years. We since added one, retried the backup, no luck.

Any new ideas on what to try?

Looking at more detailed logs, I see it starting up here:

Edit: Hmm…it appears somehow the server end is preventing new files entirely. Looks like it’s a user error and not a Duplicati error. 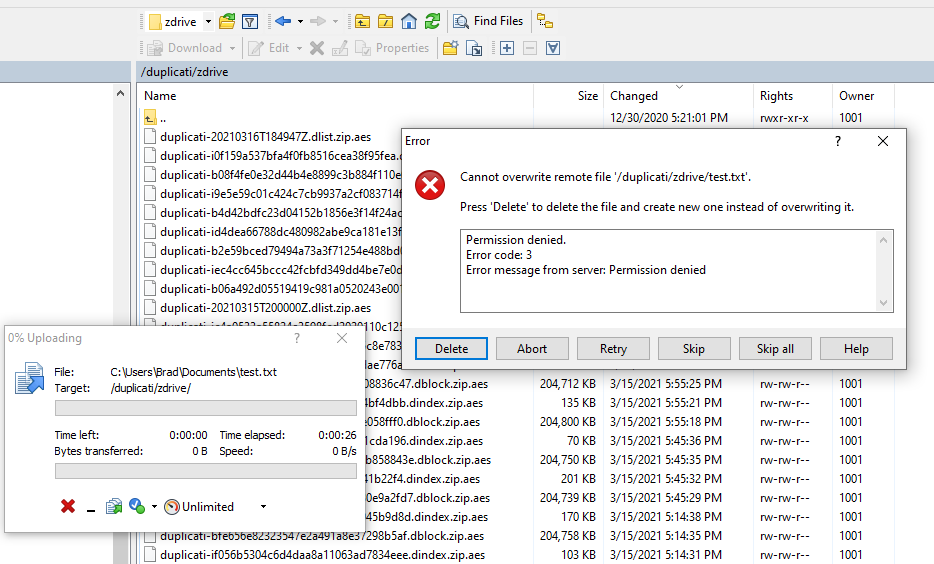