I’m doing some experiments with Duplicati before commiting to it, and I have to say I like it a lot, but there are a couple issues I found.

Not terminal issues, but I thought I’d bring them up.

Hello @mtsgsd, welcome to the forum - and thanks for trying out Duplicati!

Regarding your first issue I’m gong to guess you’re using the 2.0.2.1 beta (or early canary) version, yes? If so, that’s a known and fixed issue in later versions.

Your second issue is actually a feature. Since Duplicati keeps a local database record of what’s been backed up, during a restore it will compare what has most recently been backed up against the current live files.

If the local file hasn’t changed since it was last backed up then the restore is done from the local file as that will almost surely be faster than a restore from a remote location.

To tell Duplicati to ONLY use the remote files during a restore (useful for testing like you’re doing) you should enable the --no-local-blocks parameter.

I didn’t explain myself well enough for the second point I think. The savesets were from a remote location (file server), and were deleted in step 1. I then attempted to restore the files to a new (local) location (original files haven’t been touched, I wanted to see how Duplicati would respond to missing savesets).

It produced an error that the saveset was missing (correct) and that the restore completed successfully (incorrect, no files were created at the new location).

So when you say that it would use the local file, in my case the only local file would be the saveset which does not exist. Only the original files on the remote server exist.

Thanks for the help!

and that the restore completed successfully (incorrect, no files were created at the new location).

I agree, some of the verbiage / output messages need a bit of work. I think I noticed something like this before.

the restore completed successfully (incorrect, no files were created at the new location)

Ok. That does not match with my understanding of hotter it should work. If I wanted to replicate your test would this make sense?

I tried it again just manually deleting the files and restoring back to the original location. Same result as shown here. 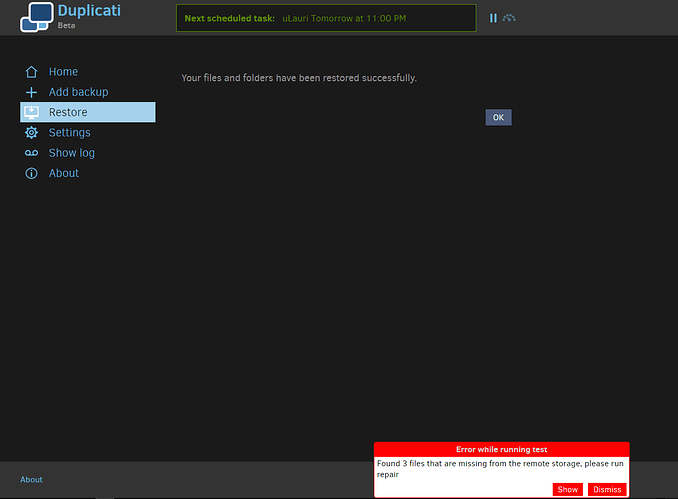 It’s a minor thing since there’s no doubt there was an error. I just picked up some persnickety habits from an old QA job.

Ahhh, I think I get it now. You’re saying there’s conflicting responses - one that “Your folders have been restored successfully” (which they haven’t been) and an error message that “Found 3 files that are missing from the remote storage” (which they are).

Assuming I’ve got that right, I suppose you would prefer a message like “There was a problem restoring your files” or something similar?

Oh, and I was able to replicate the problem - thanks for pointing it out!