Are there any details on the BB issue?

I notice that while Duplicati is really slow (70-80KB/s during file uploads so 50MB chunk files take about 10 minutes each to upload) adding a file manually through the BB web interface is quick, and uploads through other apps (I tested restic) don’t seem to be slowed down so much.

Maybe it’s something to do with the particular calls used by Duplicati being used to put files?

Are there any details on the BB issue?

B2 upload speed suddenly plummeting has Backblaze seemingly fixing a network setting at their end, and increasing a Duplicati user’s upload speed by 10 times. They also say people can ask Backblaze support.

While testing on my own slow system yesterday, I raised its upload speed 20 times by reconnecting WiFi, which cleaned up its packet-level behavior quite a bit, and had it uploading at nearly my lines’s upload rate.

Below are before and after graphs, per my earlier comments about using Task Manager to see throughput. 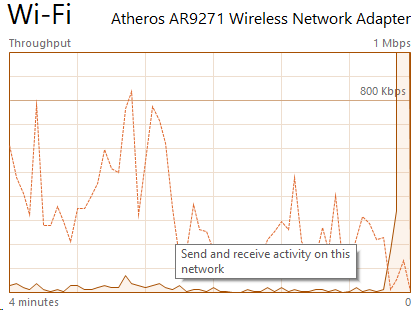 You can see a slow and very uneven upload followed by a download spike which is the verification sample. After disconnecting and reconnecting my PC WiFi connection, the graph looks much faster and smoother:

That reddit thread was actually mine, lol. I was just about to come back in here and report that the issue seems to have been the pipe at Backblaze and appears (from my end) to have just cleared up by itself.

Yes I have also noticed a marked improvement in the past day or so.

B2 uploads working as they should! I put all backup traffic in a lower priority QoS class so that it can consume all my unused upload bandwidth, but not interfere with my regular upload traffic. Backup traffic is shown as green in this chart:

Before Backblaze fixed the issue, I was not maxing out my upstream bandwidth (which is about 20M).

I wish it would max out mine (or closer at least) - i’m still averaging 10 to 15 megabits and my connection is supposed to support 50 up.

Just a quick update to say that this morning yet again (much like last week at around the same time), my speeds suddenly plummeted by a factor of ~20. A 500mb dblock is now taking from a half hour to 80 minutes to upload.

Interestingly now when I try uploading a file directly to B2 via the web GUI, it goes at basically full speed. All while my Duplicati upload is struggling along at maybe 100KB/s.

Another small update - Backblaze support walked me through installing the backblaze CLI tool and asked me to do a CLI file upload. When I did, it ran at approaching 50 megabits - i tested using a copy of one of the duplicati chunks currently in my queue (roughly 500MB), and a file that duplicati is currently taking between a half hour and an hour to upload, took about 1 minute via the CLI. That’s discouraging.

I just wanted to say I have the same issue in the last few days. My Duplicati uploads max out at around 5Mbps. My connection is 20Mbps upload and that is what backblaze.com/speedtest shows. So it looks like the issue is somehow related to Duplicati. The files I upload are big at around 1 GB each.

I ran into this same issue. I was on 2.0.4.5 and was getting 3-7 megabits/s. I updated to 2.0.4.23 and excluded some more files (turns out Minecraft modpacks have a LOT of files) and now I’m getting 40+ megabits/s. My Comcast connection is supposedly 35, so this is GREAT!

I just did a fresh install of Windows 7 64bit on a system. Latest updates installed.
Copied over user data from a previous drive.

I started a new backup to backup the entire user folder (about 22GB of data) to Backblaze via B2 protocol.

The backup is running OK it seems, and according to my Comodo firewall, Duplicati opens 4 connections to Backblaze and uploads 4 files at a time, BUT each connection only gets around 200kB/s and the total speed on average is 750kB/s.

My connection is 25Mbit up so I can get almost 3000kB/s and this is confirmed by running Speedtest (Direct to Backblaze or otherwise).
I had also uploaded some other files to Backblaze B2 via Cyberduck yesterday (from the same machine) and was getting about 2.7MB/s transfer rate, so it does seem to be Duplicati related.

Oddly enough, a backup done a few days ago from my laptop running Ubuntu 20.04 with Duplicati 2.0.5.1, and the same Backblaze B2 account was saturating the upload link just like Cyberduck.